As Brits emerge from the lockdown and start tentatively to plan holidays at home and abroad, Jon Boyle and Deborah Neame are better equipped than most – thanks to their new Mercedes-Benz Sprinter 4x4.

The base van for the couple’s new camper features selectable all-wheel drive. Supplied by north-east Dealer Bell Truck & Van, the 316 CDI model is powered by a fuel-efficient 163 hp engine and has a medium-length L2 body with high H2 roof.

Bristol-based conversion specialist Atlas Sporthomes has transformed the interior into a self-contained mobile holiday home with a compressor-driven fridge, cooker fuelled by an on-board gas tank, roof-mounted solar panels to provide electricity, 100-litre water and wastewater tanks, a toilet, shower and of course a large, comfortable bed. Heavy-duty insulation and double-glazed windows, meanwhile, will make it a cosy retreat in all weathers. 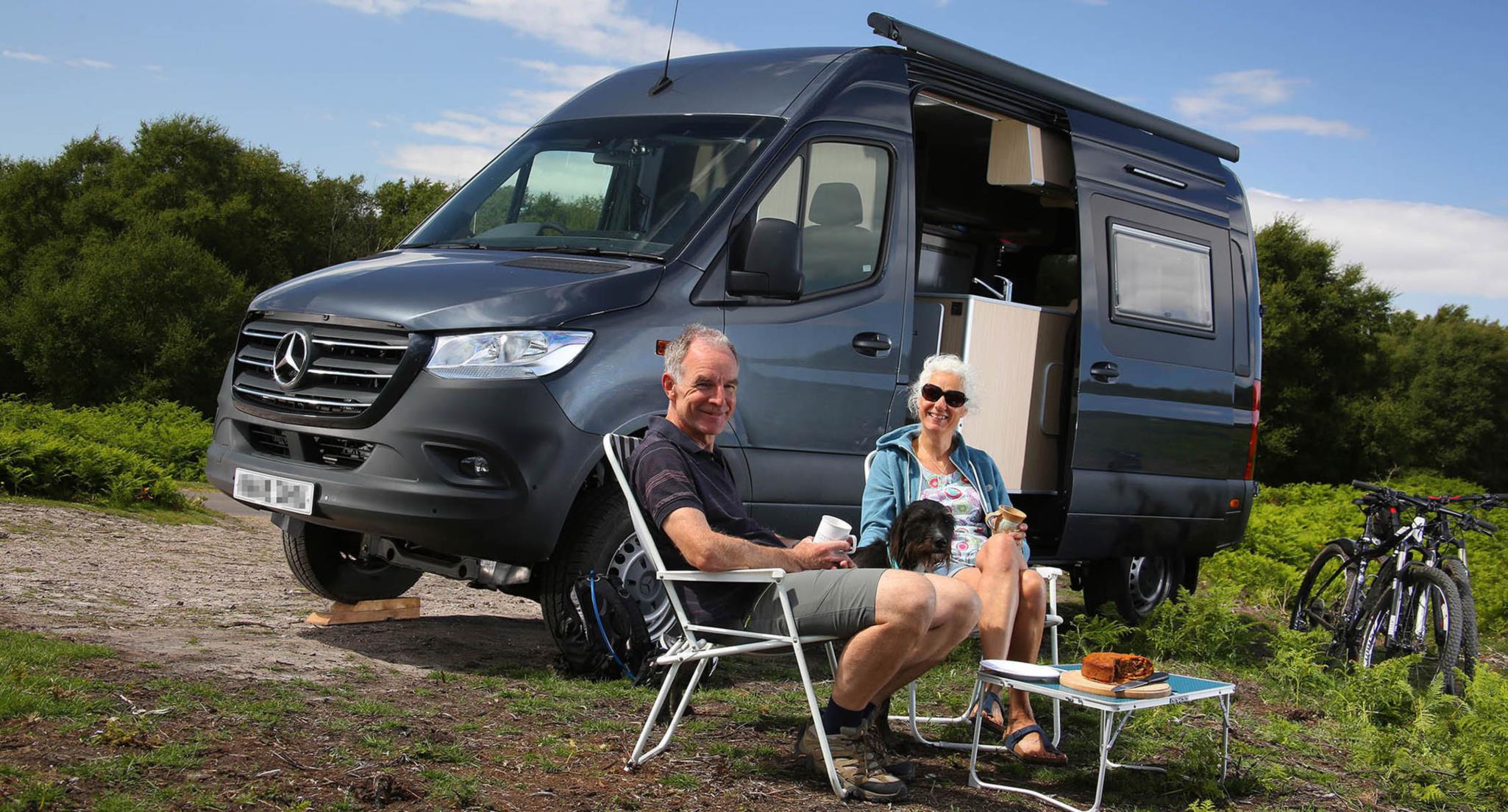 The adventurous couple, who live near Badminton, Gloucestershire, are now enjoying getting out and about in the vehicle. Shortly after taking delivery, they took it on a ‘shakedown’ trip to the Quantock Hills in Somerset, and they are now busy plotting more jaunts as the summer unfolds.

“We didn’t plan it this way, but the Sprinter has turned out to be the perfect getaway vehicle for the current travel conditions,” said Jon. “It’s great on rough terrain, thanks to the 4x4 drivetrain and raised ride height, while the solar panels and water tanks mean we can be ‘off-grid’ and isolated for at least a week at a time.”

He recalled: “We were originally looking for a low-mileage, lightly used example. The Sprinter 4x4 is a specialised model though, and owners tend to hang onto them, so there aren’t many available.

“I’d already approached several other dealers, when I spotted this one advertised for sale by Bell Truck and Van. I contacted Sales Executive James Hutchinson who explained it was a new, unregistered vehicle but available from stock – it had exactly the specification we wanted so I told him there and then to consider it sold.

“James offered to deliver the van to us – a round trip of around 600 miles – but we were keen to try it out as soon as possible, so we took the train up to Newcastle. He met us at the station and took us straight to the dealership. We signed all the paperwork, enjoyed a wander round the city and a night in a hotel, then picked up the vehicle next morning.

“The drive home was a revelation. We’d owned a couple of campers before, one being a standard rear-wheel drive Sprinter that was nearly 20 years old when we sold it. Unsurprisingly, therefore, the new one is noticeably smoother and more comfortable. With features like air-conditioning and the fantastic MBUX infotainment system with voice control, it feels more like a luxury car than any van I’ve driven previously.” 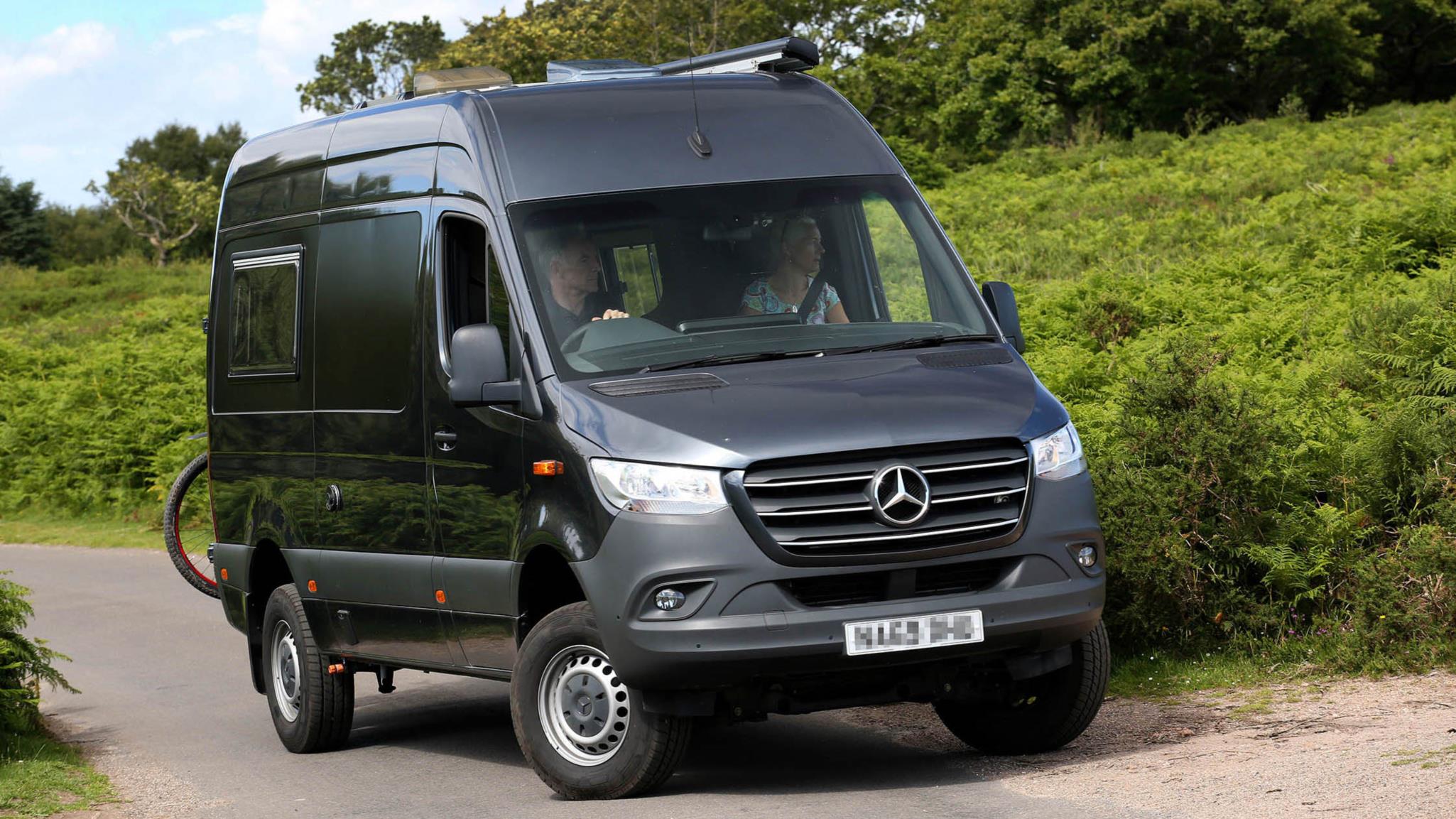 As the pandemic took hold, though, the couple’s plans to get the vehicle converted and then start using it were frustratingly delayed. “Many people have suffered terribly,” acknowledged Deborah, “so not being able to get out and about in the camper was a very minor inconvenience indeed. Now the lockdown has been lifted, though, we’re both very much looking forward to enjoying what’s left of the summer in our fantastic new Sprinter.”

Atlas Sporthomes Director John Moore is equally delighted with the results of the bespoke build project. “Jon and Deobrah knew what they wanted in terms of the design and layout – we just made a few suggestions on tweaks and alterations to fit everything into the available space,” he said.

“Social distancing restrictions and difficulties in getting hold of materials and parts meant the construction process took much longer than normal, but it’s been worth the wait. Jon and Deborah’s Sprinter looks really smart and certainly turned heads when we took it out for a test drive.”

Jon Boyle added: “Our new Sprinter 4x4 takes comfort and practicality to a whole new level. Designing the interior from scratch meant we could tailor everything just the way we want it. Our foray out into Somerset could not have gone better and we’re now ticking off the days until we can venture further afield.

“We hope to take it to Scotland, then maybe mainland Europe, but I’m already dreaming of longer trips – I’d love to get to Iceland, North Africa and even the USA, where this Sprinter would be our perfect travel partner.”